The project un.documented aims at highlighting the issue of Roma people who lack personal identification documents through identifying the variety of misunderstandings between the civil society, NGOs and government institutions all trying to solve this societal problem. The project will encourage the discourse between different governmental institutions and non-governmental organizations by bridging them through an online platform.

There are serious issues which generate mostly in marginalised and vulnerable groups, in the Balkan peninsula, mainly in Roma communities. Focusing on the three main issues that Roma communities mostly encounter and suffer under – Healthcare, Education and Housing – we address the struggles of being undocumented, in order to provoke attention from the society and further discourse about the topic with the help of interdisciplinary studies, artistic research and interviews with different institutions and experts.

Throughout the project cycle, we created many connections between different stakeholders, institutions and organizations which was the essential part of our social design actions. The important results out of whole process are:

By focusing on two Balkan countries, Bulgaria and Macedonia, the four of us tried to figure out how different these two nations’ structures and approaches are, and how these two countries envision their future with Roma communities. These two Balkan countries serve as good examples to compare different approaches and policies for Roma inclusion, since Bulgaria is working towards the European Union’s policies and Macedonia is a non-EU country, striving to become one.

The objective of the project as previously mentioned is to bridge the different institutions and stakeholders from various level to have a discourse on the topic of undocumented Roma people. More specifically the objectives of the projects are:

click the link to see the online platform : www.un-documented.com

In Buddhism, the term ‘Indra’s Net’ symbolises how we individuals are all glass beads which are threaded together in a vast net. This glass bead net is so huge that the end cannot be seen and all beads are connected with each other. Each bead projects an individual;  at the same time the connectedness of the net describes a cosmic matrix. Indra’s net thus describes how we are all interconnected. Indra’s Net emphasizes the importance of symbiosis. We should understand ourselves as a whole, like Indra’s Net, but ironically we have always separated ourselves from each other throughout the long history of mankind, due to issues of mutual understanding and due to historical, cultural, and ethnic reasons. Thus “others” such as the Roma communities, confront a huge barrier to live their lives within the majority culture, which is represented by “us”.

During the interview process, it became clear that there were several points which were repeatedly mentioned by various institutions and stakeholders. Therefore, after brainstorming and collecting the data from the interview quotes, we figured out that which interview quote is associated with which issue, how this issue is linked to another issue. It turns out that they are connected to each other and that one problem causes another, which can lead to another. Thus, through Indra’s net, we tried to show how these problems are concretely connected and how it influences to the other issue in macro level.

The way to make a documentation should be chosen carefully, depending on who the target group is and who the subject of the documentary is. Drawing is one of the various ways, which is very indirect and analog in the way it replicates the figures. The use of drawings has been used in various contemporary social science researches, primarily in the field of anthropology and sociology as well as arts based research and participatory visual methodologies (De Lange, Mitchell, & Stuart, 2007; Rose, 2001). The use of drawings either through documentations or through expression of individuals has been used as early as 1935 (MacGregor, Currie, & Wetton, 1998). Within art based research, it is argued that drawings or any visual representation speak for themselves and that they can represent something that is not easily expressed through words (Weber 2008).

For this reason, it can occasionally imply more hidden or obvious messages than photography or video recordings. Furthermore, drawing as a tool of reproducing what the eye sees is a very indirect way of conveying the situation, therefore the audience can receive the messages individually and differently. In addition, through the drawing process as a medium, the psychological distance between the recorder and the recordees can be closer. Depending on which tool and method the researchers use to document, the way to interact with the interviewees can be significantly different.

Since people are often repulsed or lose their natural behaviour in front of the documentary tools such as camera and voice recorder, they try to be perfect for what they are talking about during the interview, and in such cases, the content of the documentary, including the interview, can be very different than expected. Moreover, in the case of video footage, because the words or actions of the person are recorded and are consumed by many people at the same time, frequently there are situations in which video shooting is rejected by interviewees.

It was therefore important to document Roma communities, institutions and organizations by drawing, in order to not only create a comfortable and relaxed atmosphere between them and us but also to achieve an eye level. The atmosphere often changes the content and manner of the conversation, and it also helps to remove the barriers of communication between researchers and interviewees, not just because of the drawings as a tool but also because of the way audio recording has been used. The interviewees were assured that the records will only serve as notes during our working process and will not be streamed in public, which in its own way significantly contributed to a comfortable atmosphere, in which they felt free to speak out. 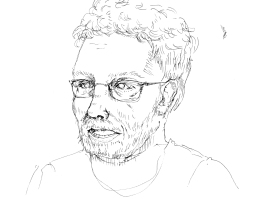 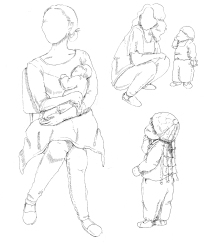 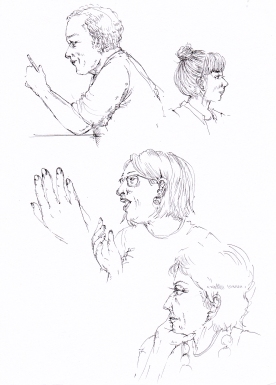 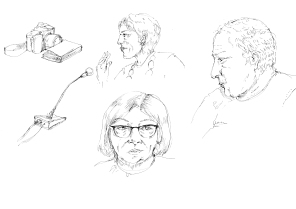 By doing illustrations and notes, the Hawthorne effect can be mitigated of the individuals being met. In particular, the Roma communities, government employees, and NGO workers have specific identities in some societies, therefore the researchers tried to prevent the secondary biases which can be produced by documenting them including the physical attributes of the people, the geographic location of the interviews and the people around them.

The drawings used for our project have been made in black and white because we believe that colors often convey specific characteristics, details, information about status, class, ambience and circumstances. The idea is to avoid distraction by painting biased pictures of the situation but to increase the attention on the content within the drawings. 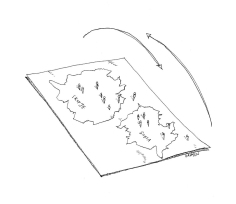 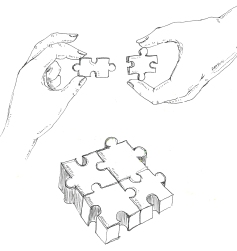 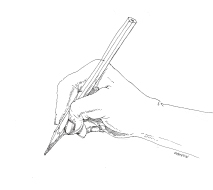 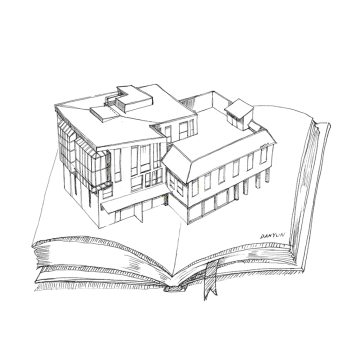 They were used as a specific tool and one of the artistic approaches for the project, the drawings are required to design the online platform. Each drawing has been drawn with very fine and soft lines, and it is intended to create a visual identity of the project, and connect different sequences. In order to create wider spaces to imagine the interview place, circumstances, and the air of the situation, it was also necessary as much as drawing people, to portray selected details of the place, such as plants, furnitures, surroundings.

All rights reserved. No part of this website may be reproduced, distributed, or transmitted in any form or by any means, including photocopying, recording, or other electronic or mechanical methods, without the prior written permission of the publisher, except in the case of brief quotations embodied in critical reviews and certain other noncommercial uses permitted by copyright law.